Juicers will change the way you eat and are one of the best small appliances you can invest in to boost your daily vegetable and fruit intake. A good juicer will make you crave fruit juice and experiment with soups and sauces. The original juicers hit the market with a refreshing splash in the 1970s with many juicing pioneers doubling as fitness gurus, like the enthusiastic Juiceman. Jack Lalanne, the original fitness guru, didn’t get into the juicing business till the age of 88, but when he did, his line of juicers took off. We review the Jack Lalanne Juicer alongside famous and lesser known juicers on the market.

What Is the Jack Lalanne Juicer?

Juicers crush food with masticating, twin-gear, or centrifugal force. The most common are centrifugal which crush and juice fruits without trouble, but sometimes can struggle with completely juicing greens, especially the fibrous ones like kale. Masticating juicers are best for fibrous veggies but may be too powerful for home use. The Jack Lalanne juicer line uses centrifugal force to keep costs down, but the motor of 3,600 rpm and 68 ounce capacity are plenty big, while the pulp collector allows the re-use of vegetable fiber. The Jack Lalanne juicer comes in white and weighs in at only 12 pounds.

We picked a few similar juicers available on the market to see how they compare on ease of use, performance, design quality and warranty. 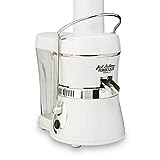 The Jack Lalanne juicer we’ve chosen is the Power Juicer Express, which comes standard with a stainless steel body, hub, and blades and a high performing 3,600 rpm (revolutions per minute) motor. This centrifugal juicing machine has enough power to juice and delivers on ease of clean-up. At 16 x 10 x 13.5 inches, this little juicer saves space but crushes pounds of fruit and vegetables.

With a one-speed motor and a body that is simple to disassemble for cleanup, this juicer doesn’t require much time with the manual. The Deluxe Power Juicer has an extra-large food chute and food pusher which makes chopping vegetables for prep a hassle-free experience. The filtering basket is easy to get to, and the dishwasher-safe plastic parts mean you can throw most of this machine into the dishwasher for clean-up.

This juicer has a lifetime warranty and won’t wear out even with daily use. It’s easy to use, doesn’t hog too much countertop space and has a practical design. Our only issue is with power. The Jack Lalanne Power Express Juicer isn’t as powerful as some we’ve tested. It takes care of most juicing, and the value is amazing, but it isn’t powerful enough for a commercial venture. For most juicing converts and for newbies, the power is generous, however.

The design is straightforward and puts function over looks, but this little juicer won’t stand out from your other countertop appliances in the wrong way. The sleek and fashionable look won’t clash. The functional design emphasizes a quiet juicer that can be taken apart without a degree in engineering. The compact size is a plus anywhere, and the fiber-catching basket is an innovative and important feature. Jack Lalanne juicers all have a pulp basket to catch the fruit and vegetable fiber for re-use since Jack knew the importance of fiber. Juicing should reincorporate fiber and pulp for optimal health.

The lifetime warranty is one of the best around, especially for a juicer of this size. 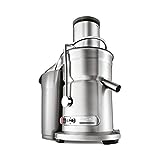 A stainless steel look and large capacity make the Fountain a workhorse and an eye-catching addition to any kitchen. Breville has several models and the Fountain Elite is top of the line in function, noise-reduction, and capacity.

The large machine makes inserting vegetables into the chute easy, and the large capacity pitcher means juicing for the whole family is never a problem. A one-speed machine that handles all fruit and most veggies, the micro-mesh basket is easy to remove for cleaning. Parts are dishwasher safe.

Like the Jack Lalanne juicer, the Breville uses centrifugal action which is not the most powerful for fully crushing vegetables. This juicer also creates a lot of foam. The power is not a problem as most users will get plenty of juice out of it. Although there are two speeds, we found ourselves using the higher speed most of the time.

This is a well-designed juicer that will last most of a lifetime even with daily use, but the design is not innovative. There is no fiber basket, so adding pulp or fiber back into juice or to other dishes isn’t an option. The look of the Breville is beefy, and some will like the industrial stainless steel but it doesn’t win any design awards. The Breville Fountain will fit in with stainless appliances, however. This juicer is also noisier than other models we tested.

The manufacturer has a one-year limited product warranty. 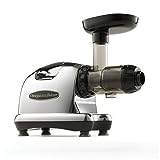 This juicer doubles as a food processor and comes from a company with a long history of building and selling reputable juicers. This masticating juicer is powerful and easy to clean and comes with an excellent warranty. Omega isn’t new to the juicing business, but be sure to read customer reviews as complaints about Omega parts may increase the odds of buying a lemon rather than juicing one.

Omega has been in the juicing business for a long time and has listened to customer feedback on juicing problems. As a result, the Omega focuses on an easy-to-clean, powerful juicer with dishwasher-safe parts. The Omega is powerful, easy to use, and handles a large volume of both fruits and veggies – but it doesn’t do as well with some fruits, particularly pineapple and strawberry. On the other hand, it does well with fibrous vegetables.

The Omega J8006 performs great—until it doesn’t. A design flaw in the baskets can cause a need to replace this part somewhat frequently. The basket tends to crack with daily use and even over time. Although the company warranty covers part replacement, the baskets are critical to good performance. As for power, this masticating juicer is a terrific machine. It is the easiest of all the juicers we’ve reviewed in terms of disassembly and cleaning.

The juicer functions well and delivers plenty of power, but defects in the parts can be frustrating, especially for daily juicing devotees. The plastic cone (sometimes referred to as the end cap) that fits around the auger has an engineering defect, which means some users have to frequently replace the cone. Even with a great warranty, parts replacement more than once is a hassle. It’s regrettable, as Omega makes juicers with a great balance of power and ease of use, but some models have yet to correct their design flaws.

The Omega comes with a lifetime warranty on parts and service.

If you love stainless steel and power in one package, this is your dream juicer. The twin-gear engine has 3HP or 86 RPM, and its design translates into more power than any other juicer we’ve reviewed. The twin-gear design makes for what some consider the most nutrient-dense juice, since the dual gear engineering means juice is exposed to less heat.

This style of juicer, long and low, is somewhat less user-friendly than a simple, compact stand-up design, but as far as placing veggies and fruit, it’s not a problem. The twin-gear means this juicer is shaped more like an oversized meat grinder. The push and fruit/veggie chute work well and are sturdier than other models, and cleaning isn’t overly complicated. The steel parts mean hand cleaning is preferred. The Super Angel comes with a handy nylon brush for this purpose. With only four parts, hand cleaning is easier than dishwasher cleaning with other juicers. The only downside is this juicer is heavy at 27 pounds.

Powerful, ideal 86 rpm motor crushes any fruit or vegetable introduced and produces a large quantity of juice, Dual containers collect pulp and juice, and with only four parts, there is less machinery to break down. A sturdy machine that won’t move around, the Super Angel is the best performer on this list. Daily juicing of carrots won’t slow the Super Angel down, and vegetables from celery to kale are easily handled by twin gear technology.

Powerful juicers use twin gear or masticating technology, and this one is similar to the popular twin gear Champion juicer that sold in the thousands. The mesh screen design and twin gear efficiency means about 20% more juice, so over time, this design saves money. The shiny stainless steel is eye-catching, but this juicer will take up a lot of space and is a hassle to move. For reliability, the Super Angel beats out the competition but convenience isn’t its watchword.

Lifetime warranty is excellent, although the parts rarely break on the Super Angel. The warranty covers parts and motor.

We recommend serious consideration of how you will use a juicer before buying since juicers come in a huge range and capacity. A juicer that is used daily and produces juice in large quantities is a world apart from a practical juicer used a few days a week. Powerful juicers with a good warranty will last a lifetime but are noisy and take up considerable space. We recommend the Jack Lalanne Power Express for first-time users. Its minimal investment will help newbie juicers decide if fresh juice is a treat, a morning ritual, or a lifestyle. This powerful little juicer brings the power without the price tag.

Nutri Ninja Vs Nutribullet: Which Is Better?